A MINIMUM OF ONE IN FIVE CONTRACTORS COMMIT FEDERAL TAX FRAUD.

Why are so many construction contractors committing tax fraud? They do it to steal jobs from tax-paying business and their employees.

Corrupt contractors pay workers off the books, or, less often, as independent contractors when they clearly shouldn’t. That allows them to evade state, local, and federal taxes, so they can illegally lower their labor costs to underbid law-abiding competitors.

Frequently, corrupt contractors use law-breaking labor brokers to shield themselves from accountability.

Construction contractor tax fraud robs our governments out of billions in tax revenues. No job site is immune. No state is immune. Here are the losses:

WHEN CONTRACTORS CHEAT ON THEIR TAXES, WE PAY MORE.

HOW YOU CAN HELP 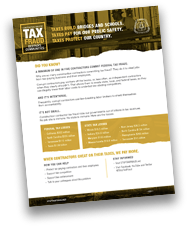