Construction Work Is Strenuous, Dangerous And Takes Skill. Everyone Should Get Paid For The Work They Do – Even Construction Workers. But Too Often They Are The Victims Of Wage Theft.

WHAT IS WAGE THEFT

Wage theft happens when workers aren’t paid all or a part of the wages they earned. Another form of wage theft is not paying the legally mandated time-and-a-half overtime premium for hours worked in excess of 40 hours in a week. It is wage theft when any worker, no matter their immigration status, isn’t paid their complete wages. Often, wage theft is accompanied by tax and insurance fraud and other crimes.

Wage theft isn’t an accident, it is a business model. Contractors often use crooked subcontractors or labor brokers in order to shield themselves from liability for wage theft, but they can still be held responsible as joint employers. And workers aren’t the only ones who get hurt by it. Wage theft gives cheating contractors a leg up when bidding against law-abiding companies. This means that legitimate companies, and the construction workers they fairly employ, lose work.

This doesn’t just affect a few people. Across all industries, workers and their families lose $8 billion a year to wage theft. Across the nation, construction workers have $946 million a year stolen from them. Construction workers in just six cities, Atlanta, Charlotte, Dallas, Houston, Miami and Nashville, had $30 million of their wages stolen in one year.

WAGE THEFT HARMS WORKERS, FAMILIES AND THE REPUTATION OF THE CONSTRUCTION INDUSTRY

Here is what a construction worker said about pride in his craft while having his wages stolen:

“It’s a beautiful trade, I love what I do. As long as the owners are doing the right thing by paying people the wages and not being too greedy. I’ve seen owners screwing people over…It has a lot of consequences; they hurt a lot of families. They don’t care if you lose your house, don’t have electricity or don’t have anything in the fridge.”

HOW YOU CAN HELP

YOU CAN HELP PROTECT CONSTRUCTION WORKERS AND THEIR FAMILIES: 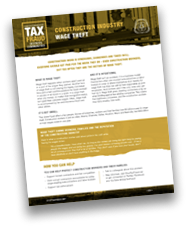